← more from
First Word Records
Get fresh music recommendations delivered to your inbox every Friday.
We've updated our Terms of Use. You can review the changes here. 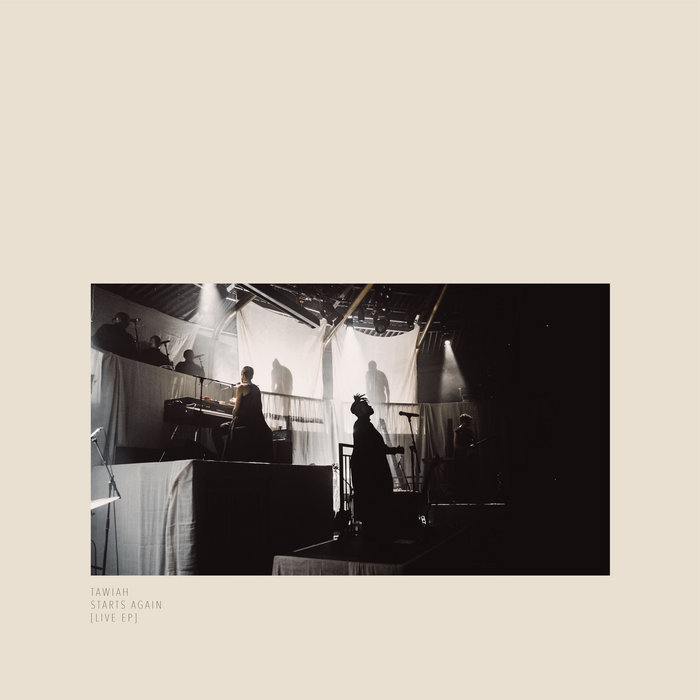 falshimento This is the reason live albums should exist. Tawiah is backed by an extraordinary selection of musicians, each a master of their own instrument, meticulously working together to deliver the best sound possible. Tawiah's voice wouldn't settle for anything less. A true performer, her ability to captivate her audience with sheer soul and sincerity is tangible, even if you're not there. The fact that the album was mixed by none other than Eric Lau himself certainly adds to the sensation. Favorite track: Mother's Prayer (Live).

Over the last decade, Tawiah (pronounced Taa-We-Ah) has a well earned reputation as a trailblazer in the world of alt-soul and as an exciting live performer.

Having self-released two EPs, various mixtapes and a number of high profile collaborations writing, touring and performing with Mark Ronson, Blood Orange, Kindness, Cinematic Orchestra, Moses Sumney, Cee-Lo, Kano, Ghostpoet, Zed Bias and Eric Lau, Tawiah released her debut album 'Starts Again' in Autumn 2019. An instant classic, the album gained critical acclaim across the board, cementing Tawiah as one of the most talented performers that the UK has to offer.

Following the LP's release, Tawiah secured support tours with Michael Kiwanuka, as well as festivals including Cross the Tracks, We Out Here, Kendal Calling and Green Man. The current climate may have resulted in cancelled gigs but it has also provided an opportunity to create new work and perform live streams for Boiler Room TV with BBZ x Pxssy Palace as well as opening up for the PRS 24hour Lockdown Festival.

Tawiah is now set to release her Starts Again [Live EP]; a selection of her favourite songs from the breathtaking sold-out launch show, staged at The Albany in Deptford, South London. The EP is accompanied by a short film of backstage footage and an in depth conversation about the process and journey of making her debut album.

On the LP launch show and resulting live record, she explains: "Writing music is my therapy but sharing it, that is where the healing is, I put everything into performing my work live, it's the most important part for me. The Albany show was extra special, I worked with Conceptual Artist Myrrh to create an immersive experience. The show was a powerful exchange of energy between me, the band and the audience, I think you can hear it in the EP."

Aided by a trusted family of musicians and singers, all of whom appeared on the album itself, this live EP gives a glimpse into the immense show production and intensive rehearsals, which followed an opening sound art installation on the night curated by Tawiah+Myrrh and produced by OLane, whilst the show incorporated several dancers and lighting design by Ben Mansfield. The live 11-piece band was made up of a seriously talented crew consisting of Sam Beste (keys), Alex Bonfanti (bass), Alex Reeve (guitar), Nathan Allen (drums), Lewis Wright (vibraphone / percussion) and vocals from Sharlene Hector, Vula Malinga, Ladonna Young, Ade Omotayo and Dezert Eagle. All fronted by Tawiah's incredible talent, this was a performance that moved every soul in the building, sweeping through emotions and climaxing in a lengthy standing ovation. Every person in attendance bore witness to something very special and will testament to that - whilst in the current environment this will be hard to replicate for some time, we hope this EP brings a little of the magic from that rainy winter evening in South London, directly to your stereo system.

A seasoned performer, Tawiah has received acclaim and coverage from OkayPlayer, Afropunk, The Guardian, iD, Complex, Stylist, Refinery, London In Stereo and Time Out, to name a few, and personal accolades have come far and wide over the years, from Jeff Goldblum and Queen Latifah, to Tricky and Quincy Jones.

Bandcamp Daily  your guide to the world of Bandcamp